Since the Berkeley Pit was designated as a Superfund site in the 1980s, things have gone largely as expected. In one instance the site remedy has proceeded at a faster pace than mandated in the 1994 Record of Decision (or ROD, available in its entirety here).

Water level modeling has also been accurate. The Pit water level has risen more slowly than originally predicted due to several factors, most notably the capture and treatment of contaminated surface water flowing in from Horseshoe Bend. This water is treated and reused in Montana Resources mining operations, with no water discharged offsite.

The 1994 model also anticipated a rate of fill of about 5-6 million gallons per day. With surface inflow captured, treated, and reused, the average rate has been much lower, about 2.6 million gallons per day. The model currently used by the Bureau of Mines and Geology uses monitoring data to project the filling rate, and over the past 5 years the model’s projections have varied by only a few months.

At 58.89 feet below the Critical Level, it is likely that the Pilot Butte water will hit the critical point first, triggering full implementation of the Horseshoe Bend Water Treatment Plant. This is currently projected to happen in July 2023, a few months later than projected in the last edition of Pit Watch in 2013.

Water from the Horseshoe Bend drainage is diverted before reaching the Pit and treated in the Horseshoe Bend Water Treatment Plant for use in mining operations. In 2012, the plant treated about 5 million gallons of water per day. Sludge from the treatment process was returned to the Pit at a rate of 491,000 gallons per day. No water or waste leaves the Pit or mine site.

Water levels in the Pit, wells and mine shafts are monitored monthly. An evaluation of the rate of fill is performed each year to determine dates for future reviews and plant upgrades.

Not long after John Chambers and his family arrive at their new home in a small country town of Pennsylvania, John begins to experience sleep paralysis. Lying there paralyzed, trapped within his own nightmare, other-worldly beings visit John. They are entities which exist in the darkest shadows of the night and can only be seen out of the corner of one’s eye. These encounters begin to haunt John, transforming to complete terror as he discovers the entities’ sole purpose… the abduction of his seven year old son. In the end, John will uncover the town’s horrific secret, a portal on his land, and make one last attempt to save his son before the shadow people permanently take him away to their world.

The Berkeley Pit will never overflow. In 1994 the EPA established the Critical Water Level (the maximum level the water will be allowed to reach) at 5,410 feet above sea level, which is one hundred feet below the rim.

Water levels are regularly monitored at the Pit, in historic underground mines, and in wells surrounding the Pit. Failure to keep the water below 5,410 feet would result in steep fines for the companies responsible for the site, BP-ARCO and Montana Resources.

In addition to careful monitoring, the Horseshoe Bend Water Treatment Plant was constructed to make sure water in the Pit remains below 5,410 feet. Pit water will be pumped, treated, and discharged when the level nears the critical point.

Even if the water was allowed to rise unchecked, it would still never reach the rim. The groundwater flow would reverse direction and, instead of flowing toward the Pit, as it does now, the water would flow away from the Pit, underground into the sandy aquifer beneath Butte’s valley.

Due to the underground flow, Pit surface water would never reach the rim. Considering the federal orders, potential fines, and frequent monitoring, Pit water will not rise unchecked.

The plant treats about 3.4 million gallons of water per day. This water currently comes from the Horseshoe Bend drainage. Treated water is used in Montana Resources mining operations.

Sludge from the treatment process is returned to the Pit at a rate of 250,000 gallons per day. No water or waste leaves the Berkeley Pit or mine site.

Looking northeast from the Berkeley Pit viewing stand, visitors can see one of the most important components in the future management of the Pit: the Horseshoe Bend Water Treatment Plant. Sitting on four acres near the former McQueen neighborhood, about 600 feet east of the Berkeley Pit, the treatment plant was constructed in 2002-2003. It sits on native land that is very stable, and the plant was built to withstand the maximum probable earthquake.

The facility was designed to treat up to seven million gallons per day, or about 5,000 gallons of water per minute. The facility cost approximately $18 million to build, and, depending on how much water is treated, operating expenses run about $2 million per year.

Once the Berkeley Pit water comes online, which is projected to happen in 2023, annual operation and maintenance costs could be as high as $4.5 million. Under the terms of the 2002 Consent Decree negotiated with the government, BP-ARCO and Montana Resources have agreed to provide financial assurances to pay operation and maintenance expenses in perpetuity. The two companies also paid all construction costs for the facility.

The actual construction of the treatment plant was a massive undertaking. It is estimated that workers put in 125,000 hours of total labor, and the facility also required more than 4,500 cubic yards of concrete.

The general construction contractor and subcontractors were all from Montana, with several from Butte, and, during the course of construction, they reported no safety incidents of any kind.

As per the schedule listed in the 1994 EPA Record of Decision and included in the 2002 Consent Decree, based upon current water level projections, a review of the Horseshoe Bend Water Treatment Plant design and operation would begin in 2019. Any necessary upgrades would have to be completed by 2021, two years before Pit water itself is currently projected to be pumped and treated in 2023.

In November, 2007, a performance review of the Horseshoe Bend plant was completed by Montana Resources, ARCO, and North American Water Systems, with cooperation from the Montana Bureau of Mines & Geology, the Department of Environmental Quality, and the EPA.

The performance test was undertaken to ensure that the treatment system is capable of meeting the water quality standards set in the Consent Decree for the site. For this test, only water from the Horseshoe Bend drainage was treated, as water from the Pit is not yet required to be pumped and treated at the plant.

The test began on November 18, 2007, and continued for 72 hours. All of the water quality standards for contaminants of concern were met. Additional adjustments still need to be made to address pH. For this test, the pH was kept at a high (basic or alkaline) level in order to effectively remove contaminants of concern and meet water quality standards. 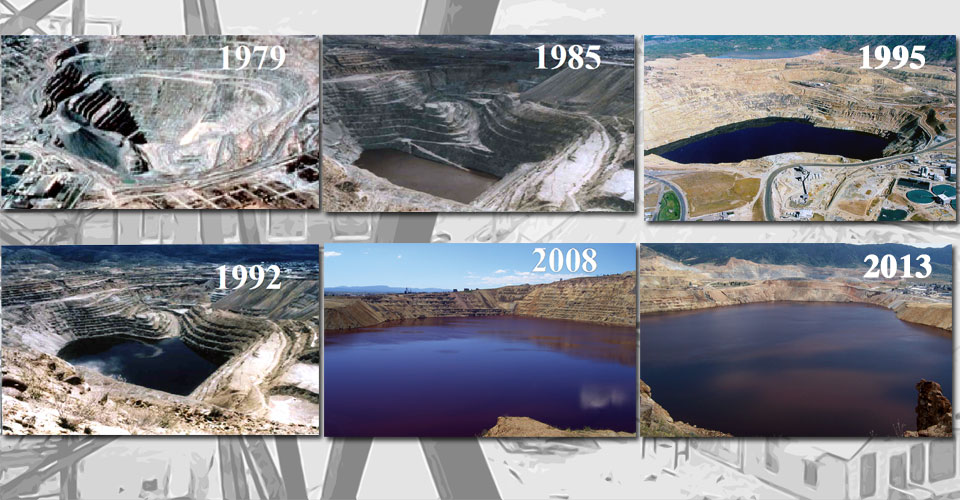 Since the last issue of PITWATCH, Montana Resources has decided to resume operations. With the mine going again and with the water treatment plant coming on line, there have been many questions from the community. Here are some answers to reader questions.

Q: How much water will go into the Pit once mining operations resume completely and the water treatment facility is operating?
A: The Horseshoe Bend drainage flow will be treated in the new treatment plant, and presently, this water will be entirely consumed in the mining operations. The remaining 3.4 mgd of flow from the underground workings and storm water flow will still flow into the Pit contributing to the rising level there. Eventually, when the water level approaches 5,410′ above sea level (expected about 2018), water will have to be pumped from the Berkeley Pit and treated at the Horseshoe Bend facility. Having the plant in place provides assurance that the capability is there when it becomes necessary to treat Pit water.

Q: Where will the treated water go?
A: Current plans are to treat the entire Horseshoe Bend drainage flow at the treatment plant, and then route all of the treated water to the concentrator for use in mine operations. As a result, and for as long as the treated water is used in the mining circuit, there will be no discharge off-site. In the event the mine was to suspend operations again, Horseshoe Bend drainage water would be treated to discharge standards at the plant. Then it would be transported by a pipeline, being constructed along the historic Silver Bow Creek channel (Metro Storm Drain), to its confluence with Blacktail Creek, just west of the Visitor’s Center on George Street in Butte, Montana.