Millions of years ago, through a process known as subduction, molten rock formed deep in the crust and rose beneath the area that would become Butte.

Seventy-five million years ago, volcanoes dotted the western edge of North America, which was located here in western Montana and in Idaho. The plains to the east, stretching into the Dakotas and south to Colorado, were mud flats laced with sandy rivers. Dinosaurs grazed, preyed, and scavenged over this wide, lush panorama during a geologic time called the Cretaceous Period.

Butte’s metallic future was evolving deep beneath the surface, in the roots of the volcanoes. A gigantic lava lamp, now petrified, lay beneath what is now Butte. Huge blobs of molten rock many miles in diameter were rising buoyantly from a depth of about 60 miles (100 km) as a result of earth’s recycling process—subduction.

Subduction results from density differences in the earth’s crust. Oceanic crust is denser than continental crust, so when the two meet—driven together by huge, slow movements called convection currents—oceanic crust usually dives under continental crust. The place where this happens is a busy location tectonically—earthquakes, volcanoes, oceanic trenches, and mountain ranges all form at such zones of collision.

The subducting slab of oceanic crust plunges to greater and greater depths. Eventually things get hot enough for water to be driven off, rising into the overlying rock where it reduces the melting point and generates the blobs of magma (molten rock) that rise toward the surface as if they were part of that giant lava lamp.

As the magma cools, cracking occurs and the voids are filled with minerals. These mineral-filled cracks eventually became ore veins.

Near the surface, where temperatures and pressures are lower, molten magma begins to solidify and even crack as it cools. The cracks form conduits for the last subterranean hot water and bits of molten rock, which often carry the good stuff—copper, silver, gold and the wealth of other minerals that made Butte so rich. When that last material solidifies, it becomes ore veins sought by prospectors and miners.

Insulated by overlying rock, the granite in the blobs of magma can take hundreds of thousands of years to completely solidify. If it does reach the surface, it may erupt through a volcano—and such volcanoes were present in this area during the Cretaceous Period. Their remnants are the Elkhorn Mountains about forty miles northeast of Butte.

Blobs of magma—as many as 16 of them—coalesced to form a huge mass of granite called the Boulder Batholith, which extends from the Highland Mountains south of Butte almost to Helena, making the batholith (a word that means “deep rock”) seventy miles long and forty miles wide. The Boulder Batholith is small as batholiths go—California’s Sierra Nevada Batholith is close to 500 miles long.

Map of the Boulder Batholith

The ultimate origin of Butte’s mineral district is not fully understood, but scientists theorize it could be because hot water flowed through rocks that already contained ore deposits.

Why is Butte so rich in minerals?

The Butte mineral district is a tiny spot within the Boulder Batholith, only about five or six square miles. Why is there so much mineral wealth concentrated in such a small area? Various ideas have been proposed, but the ultimate origin of the deposit is not fully understood. It may represent concentration by hydrothermal (“hot water”) fluids flowing through rock and picking up the metals, and that might happen in either a pre-existing low-grade deposit related to the granitic rocks, or in ancient sedimentary rocks that contained widespread but tiny quantities of the metals. Copper deposits like the one at Butte are scattered throughout the western mountains of both North and South America, so it’s reasonable to think that the subduction process is important in their formation.

Due to the chemical nature of the mineral-bearing hot waters, the Butte deposit became zoned, similar to the layers of an onion. The central part, or core, where the Berkeley Pit is today, is the richest in copper. It is surrounded by a roughly circular belt containing lead and zinc, while the outer or peripheral zone has little copper, but a lot of manganese, lead, zinc, and silver minerals. Silver in this zone supported continued mining to Butte in the late 1870s after the initial gold deposits had been exhausted. Additionally, molybdenum is concentrated in a zone 3,000 feet or more below the surface beneath the Berkeley Pit, but the same zone is at the surface in the Continental Pit to the east, because of a fault system that uplifted it.

The mineral-bearing fluids that passed through the cracks in the granite leaving their wealth behind probably did that in several pulses a few million years after the granite itself had largely solidified (about 76 million years ago), maybe as much as 10 or 15 million years later (61 million years ago or so). The region that is southwestern Montana today was also being slowly uplifted by tectonic compression that continued until around 55 million years ago, and erosion has continued from that time to the present day. Erosion stripped off miles of rock to expose the Butte granite and the metal-rich veins it contains. At times in the geologic past, the ore deposits were at shallow enough depths that they were exposed to water and the atmosphere, which altered, oxidized, and concentrated the minerals even more than they already were. That certainly contributed to the richness of the ores at Butte.

Some of Butte’s mineral deposits are more environmentally problematic than others because of the presence of various sulfide minerals, which react with water to form sulfuric acid.

Environmental Problems with Minerals in Butte

Most of the copper, lead, and zinc minerals at Butte are sulfides, with names like bornite (peacock ore), chalcocite, chalcopyrite, and covellite, just a few of the 140 mineral species known from Butte. Sulfides contain sulfur which are problematic because sulfides react with water and oxygen to produce sulfuric acid. Sulfuric acid is the material that makes the Berkeley Pit and underground waters acidic. In contrast to Butte, copper mining in the Keweenaw Peninsula of Upper Michigan has left a less problematic environmental legacy because most of the copper there is pure, native copper – not sulfides. Butte is also famous for another mineral, enargite, a copper-arsenic sulfide. In some parts of the ore body, as much as 40% of the copper came from enargite, and disposal of the arsenic also contributed significantly to Butte’s environmental problems. 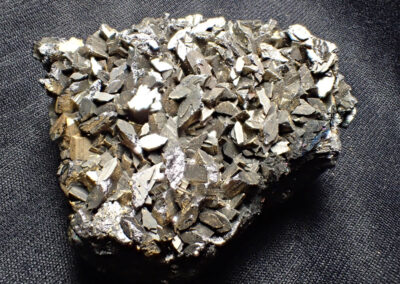 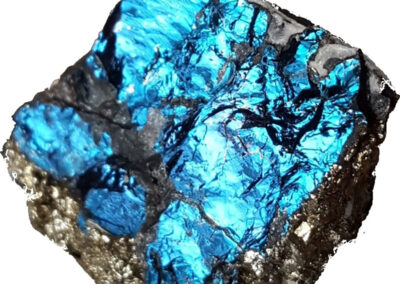 Mining declined and almost ended in Butte not because the ore was exhausted, but because cheaper competition from places like Chile made production in Butte uneconomic. The U.S. Geological Survey estimates that there is as much resource remaining in Butte as was taken out, and that means that in the United States, Butte ranks #1 in copper in terms of produced plus remaining resources, #1 in silver, #4 in zinc, and probably #1 in manganese. But much of that resource cannot be produced economically.