Water and the Berkeley Pit


Water in Butte Before Mining

Where did water exist in the Butte Hill and valley before mining?

What happened with water in Butte during underground mining?

How did the Berkeley Pit change the water resources in Butte?

Why is the Berkeley Pit filled with water and what happened to the historic water resources?

What metals and minerals are in the Berkeley Pit and why are they there? Why is the composition of the water so harmful to life?

Want to learn more about the Berkeley Pit than is covered in this primer?

Water in Butte Before Mining

Since mining began, the water resources in Butte and the Summit Valley have changed drastically. Butte is located just northwest of the Continental Divide, water flows from drainages throughout the area which collect in surface waters in the center of Butte. Historically, this central area of Butte was comprised of small creeks and wetland areas. Today, Basin, Blacktail, and Silver Bow Creeks and various wetlands remain. In the late 1890s, historic mining imprinted itself on the local landscape and dramatically altered the area’s groundwater and surface water systems.

Water was both an asset and a liability to mining. The presence of groundwater relatively close to the surface created an imposing challenge for underground mining operations. Over time, the Anaconda Company engineered a sophisticated drainage system within the vast underground mining systems to route groundwater to centralized pumps to allow for underground operations. Without this pumping system, groundwater would flood the shafts and drifts used to access and mine the area’s vast ore bodies. Despite the liabilities of groundwater, the surface waters throughout the area proved an important asset as they became central to the viability of the area’s mining operations and facilitated smelting and refining processes throughout the area. Surface waters were even used to convey contaminated byproducts of these processes downstream.

Before underground mining began on the Butte Hill and in the Summit Valley, Butte’s groundwater system contained groundwater from two sources: bedrock (hard rock) and alluvium (sandy gravel near the earth’s surface and below the soil layer).

Water found in bedrock collects in naturally occurring fractures and spaces between the hard rocks. Bedrock aquifers are typically found deep below the surface under layers of soil and sandy gravel.

Water found in alluvium collects in the spaces between the grains of sand and gravel. Alluvium is a sandy gravel material that is found on top of bedrock near the surface and below the soil layer. Think of this as the sands that lie on the banks of rivers and streams.

The graphics below show a comparison of the groundwater systems before and after mining took place (*these are renditions and not actual representations of Butte’s system). Notice how the Berkeley Pit sits lower than the rest of Butte and also how most of the bedrock groundwater flows towards the Berkeley Pit, as it is the lowest point in bedrock system, similar to how water collects in the bottom of a sink. 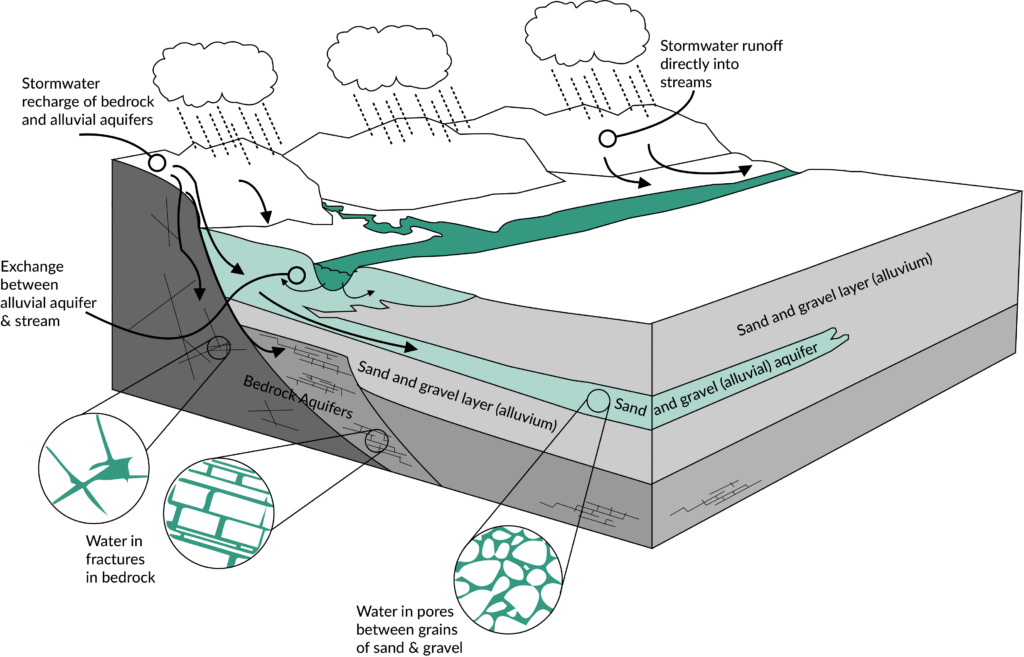 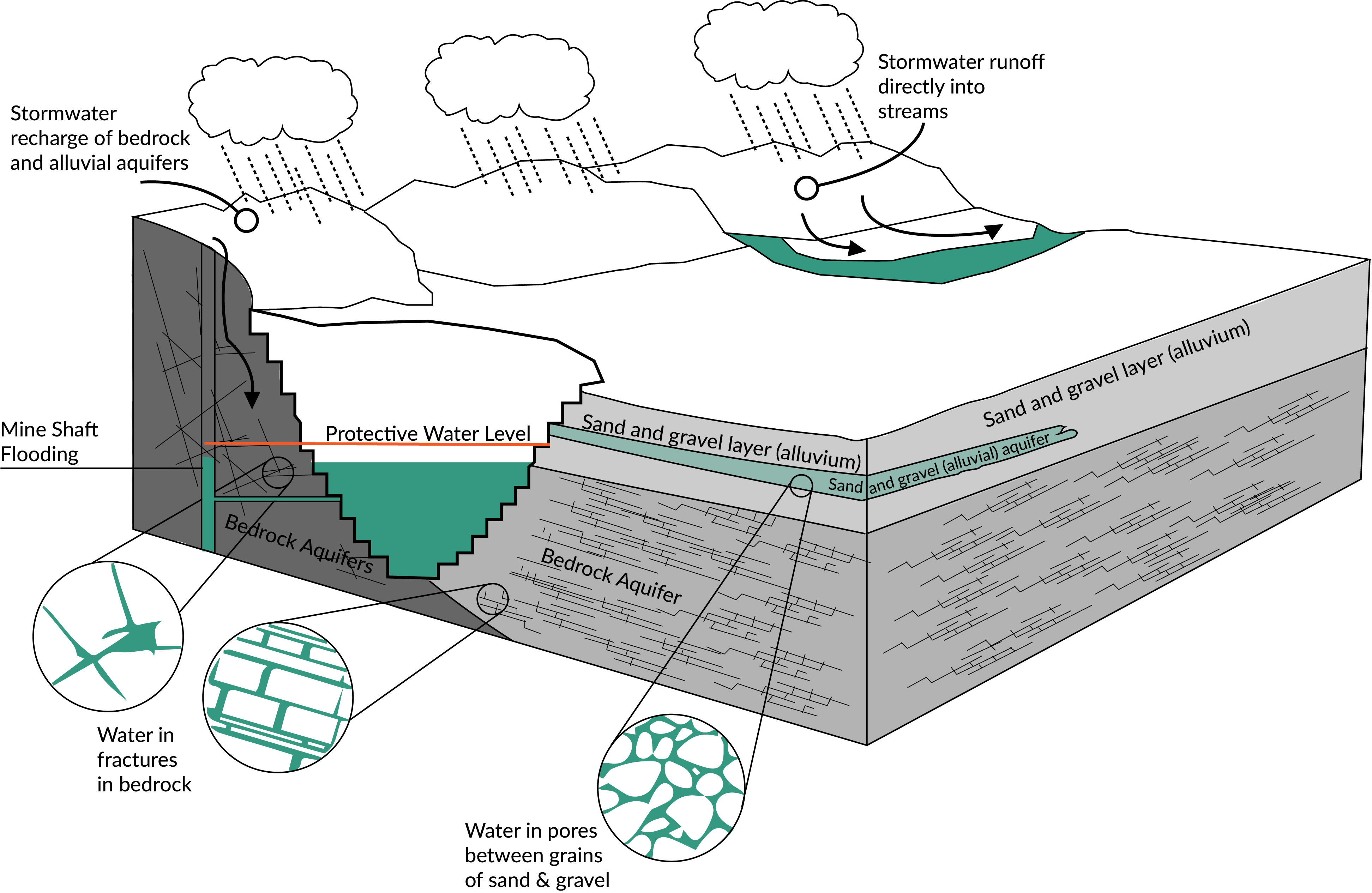 How has water in Butte changed?

Prior to mining, groundwater naturally flowed through fractures in granite bedrock and through the pore spaces between sand and gravel grains in the overlying alluvial deposits laid down by upper Silver Bow Creek. Underground mining created a network of vertical shafts and horizontal tunnels to access ore veins and large void spaces where veins were mined out (stopes). The 10,000 miles of underground workings now functions as a large drain system for the fractured bedrock aquifer. Think of it as a karst (cave) system in limestone. See above for more information about Butte’s groundwater system.

This graphic illustrates how water was pumped from underground mine shafts and up to the surface.

Open pit mining creates a series of benches that are dug into the ground to extract all of the rock (ore containing or not) out of an area. Over time, this creates a large void or an open pit mine.

Where did Silver Bow Creek Go?

Water from the upper Silver Bow Creek watershed collects in the Yankee Doodle Tailings Pond and is used in active mining operations within the Continental Pit. Today, Silver Bow Creek receives all of its water from Blacktail and Basin Creeks at the confluence near the Butte Chamber of Commerce.

Why is the Berkeley Pit filled with water and what happened to the historic water resources? Is all the water in Butte contaminated?

When open pit mining at the Berkeley Pit stopped in 1982, the pumps at the nearby Kelley Mine were shut off for the first time in over 100 years. This decision caused the groundwater to return to the fractures within the bedrock and the spaces between sands and rocks in the alluvium as well as the underground mine tunnels and the void left by the Berkeley Pit.
The graphic below illustrates how groundwater is returning to both the Berkeley Pit and the old mine shafts.

Is all Groundwater in Butte Contaminated with Berkeley Pit Water?

Water Composition of the Berkeley Pit

What metals and minerals are in the Berkeley Pit and why are they there? Why is the composition of the water so harmful to life?

Underground mining in Butte left a network of tunnels and shafts that contained exposed rock. Much of this exposed rock is composed of Iron Pyrite (fools gold). In a naturally occurring bedrock system, iron pyrite remains out of contact with air. However, when iron pyrite is exposed to air and water it creates sulfuric acid.

In the case of the Butte Mines, nearly 10,000 miles of tunnels were left exposed to air. Furthermore, when the Berkeley Pit closed, the groundwater pumps were shut off and groundwater returned. The returning groundwater mixed with the air-exposed iron pyrite creating groundwater contaminated with sulfuric acid. Sulfuric acid also helps breakdown other metals and minerals found in the bedrock in the Butte Hill, adding even more contamination to the water.

The Berkeley Pit contains water contaminated with over 21+ metals and minerals as well as sulfuric acid. 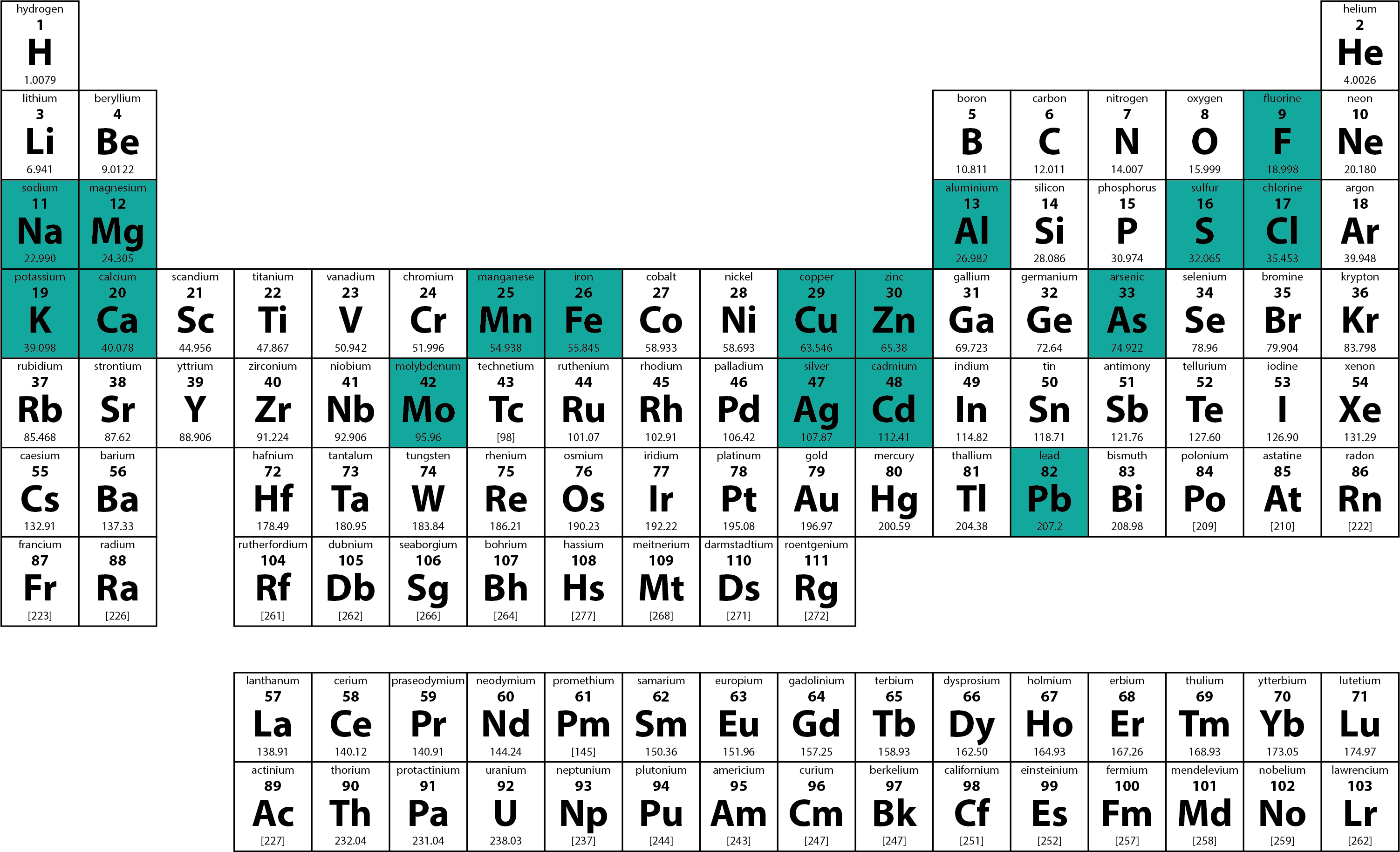 Why is the water harmful to life?

The pH of the water is too acidic to support aquatic life like fish or small macroinvertebrates, but researchers have discovered extremophilic organisms surviving in the Pit. Drinking water has a pH value of 7.0, the Berkeley Pit has a pH that ranges between 2.5-4.5. The graphic below illustrates the pH levels that aquatic life (other than extremophiles, such as those found in Yellowstone National Park) need in order to survive.