Historically, water flowed through natural streams, wetlands, and groundwater systems in Butte. This natural system was disrupted by human activities, including mining.

Since mining began, the water resources in the Butte area have changed drastically. Butte’s surface waters form the headwaters of the Clark Fork River, which is part of the Columbia River system that flows into the Pacific Ocean. Butte’s surface waters begin in small drainages high in the mountains and meet in larger creeks flowing through the center of town.

In the late 1800s, historical mining imprinted itself on the local landscape and dramatically altered the area’s groundwater and surface water systems. The map below illustrates historic water flows through the urban area and generally depicts stream flows prior to mining. The illustration shows historic Silver Bow Creek flowing from the northeast and through what is now the east wall of the Berkeley Pit. 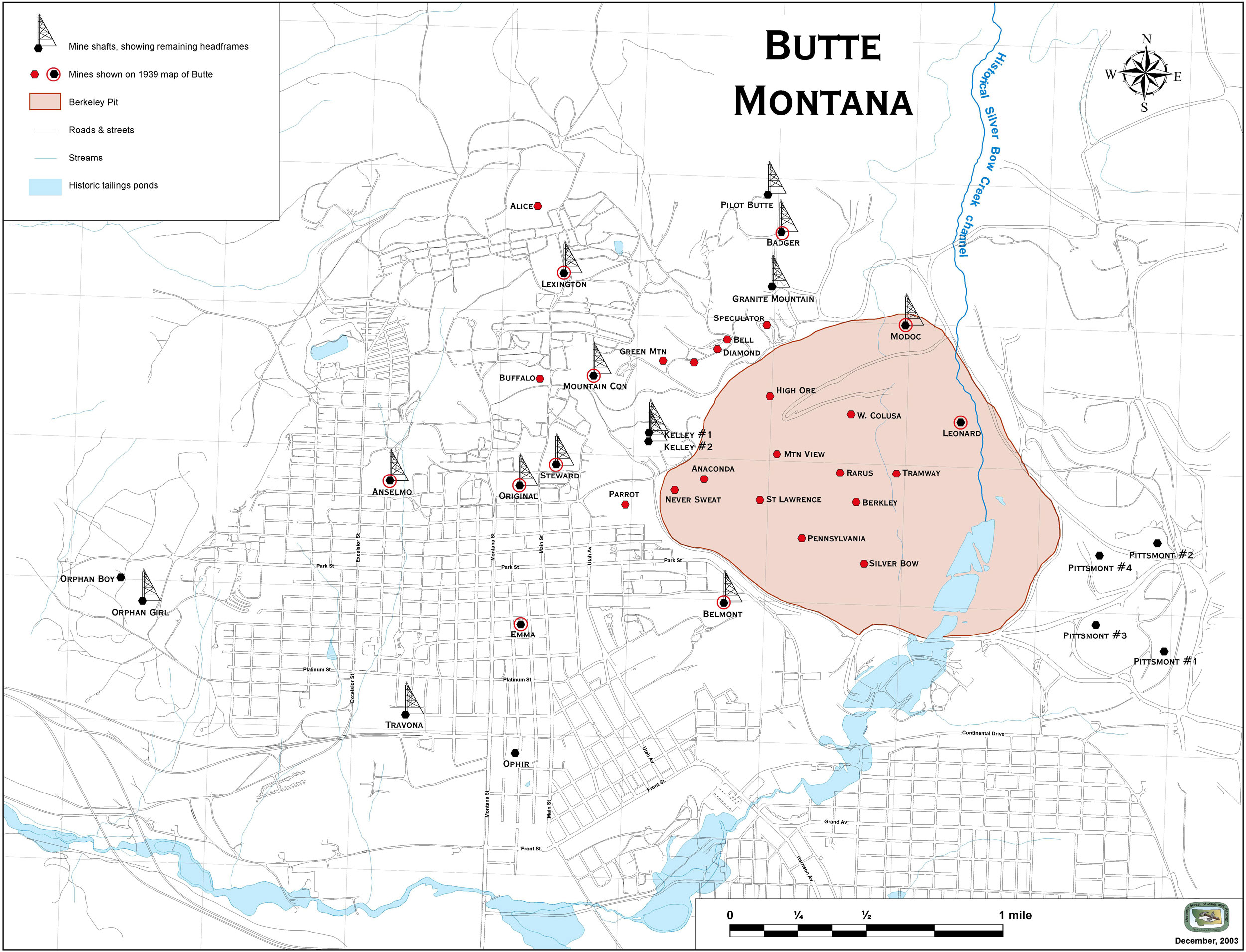 Map of Butte that shows historic Silver Bow Creek. Photo courtesy of the Montana Bureau of Mines and Geology (MBMG).

Butte’s groundwater system consists of two aquifers, the bedrock aquifer (hard rock) and alluvial aquifer (sandy gravel near the earth’s surface and below the soil layer). Water found in alluvial aquifers collects in the spaces between the grains of sand and gravel. Water in bedrock aquifers collects in naturally occurring fractures. Bedrock aquifers are typically found deep below the surface under layers of soil and sandy gravel.  Alluvium is a mixture of sand and gravel found on top of bedrock and below the soil layer. A good example of alluvium are the sands that lie on the banks and beds of rivers and streams.

For 100 years, groundwater was pumped out of the ground to allow mining of ore bodies by underground and open pit mining. Today, there are thousands of miles of tunnels and at least four open surface pits where mining occurred or is still occurring.

Historic underground mining relied on a network of vertical shafts and horizontal tunnels (known as drifts) to access mineral rich ore veins. The tunnels connected large void spaces where miners could access ore veins, remove the ore, and bring it to the surface for processing.  It is estimated that over 10,000 miles of underground workings were created by mining of the Butte Hill. 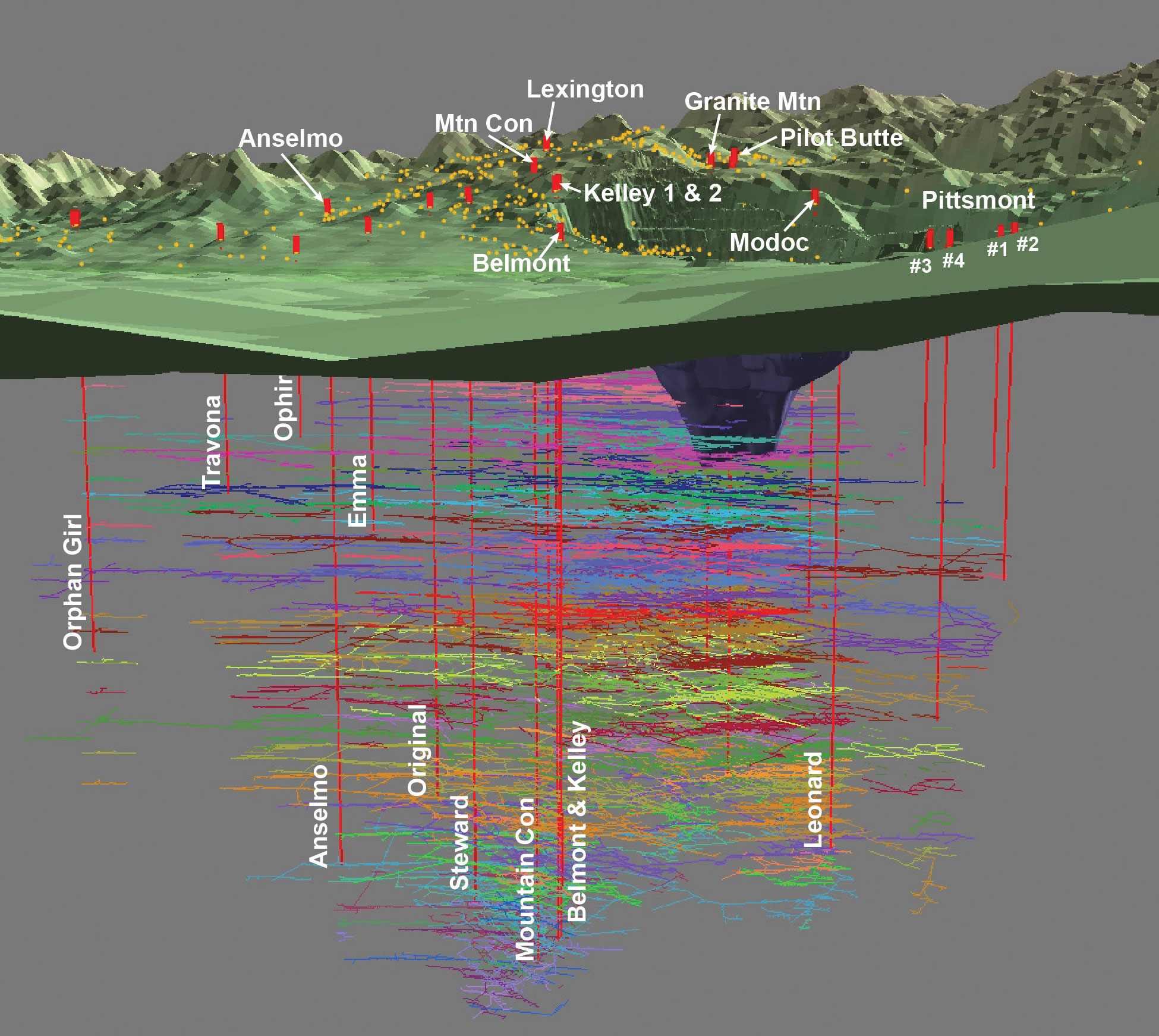 This graphic from the Montana Bureau of Mines and Geology shows the vast network of underground workings as they currently exist in the Butte Hill. Notice how the tunnels are spread out underground.

The pumping stations in the High Ore and Kelley Mines moved water throughout the system for use in ore processing and ultimately release into Silver Bow Creek. Some estimate water pumping on the Butte Hill occurred continuously for over 100 years.

Today, groundwater moves through the mine tunnels and fractured bedrock and collects in the Berkeley Pit,  much like how groundwater flows through karst (cave) systems in limestone.

Open pit mining creates a series of benches that are dug into the ground to extract all of the rock (ore containing or not) out of an area. Over time, this creates a large void or an open pit mine.

The pumps used to pump groundwater were turned off in 1982 and since then groundwater has been returning, flooding the underground tunnels and slowly collecting in the Berkeley Pit.

When open pit mining at the Berkeley Pit stopped in 1982, the pumps at the nearby Kelley Mine were shut off for the first time in over 100 years. This decision caused the groundwater to return to the fractures within the bedrock and the spaces between sands and rocks in the alluvium as well as the underground mine tunnels and the void left by the Berkeley Pit.

Since the pumps were turned off in 1982, roughly 49 billion gallons of water have filled the Berkeley Pit. That’s the equivalent of about 74,000 Olympic sized swimming pools. Water continues to flow into the Berkeley Pit through the alluvial and bedrock aquifer systems. To prevent Berkeley Pit water from contaminating Butte’s surface water systems, it must be

Is all Groundwater in Butte Contaminated with Berkeley Pit Water? 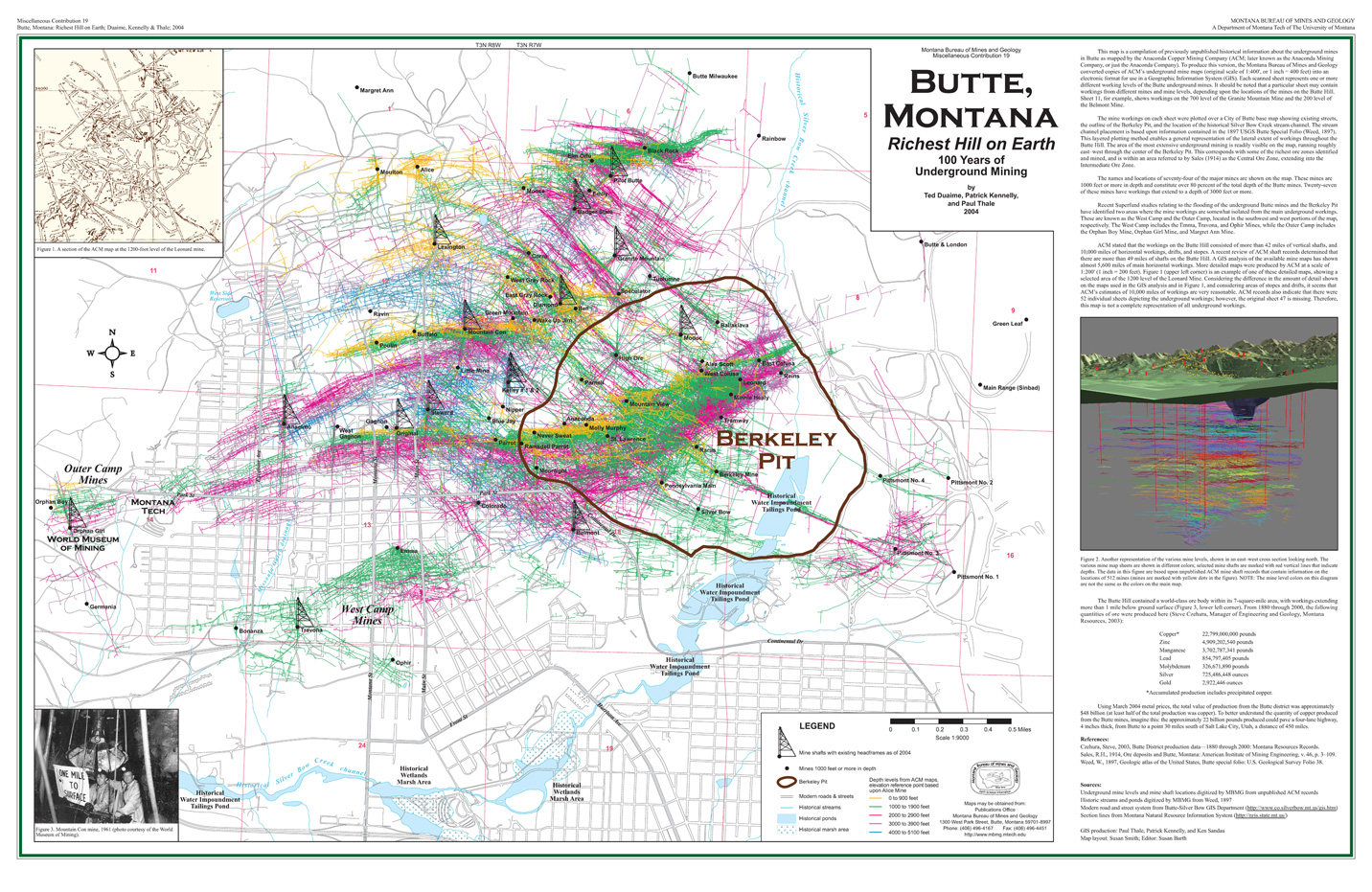 This map illustrates historic underground mining activities. Each color represents a different subterranean depth where mining occurred, and depicts the concentration of shafts and tunnels accessing orebodies in the district.  The outline of the Berkeley Pit indicates where open pit mining occurred following the underground era.  Note the concentration of shafts and tunnels in the area. Photo courtesy of the Montana Bureau of Mines and Geology (MBMG).