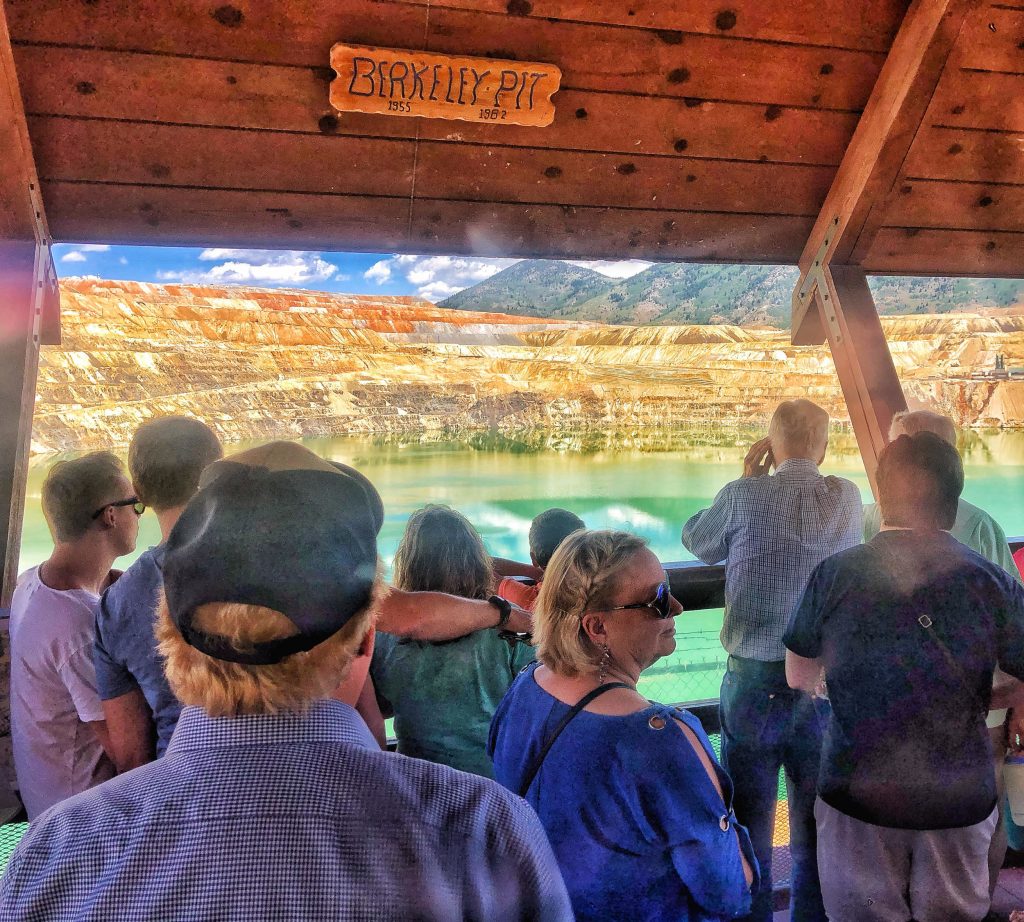 The Berkeley Pit viewing stand ordinarily sees as many as 300 visitors each day when it’s open, making up for around 35,000 visits a year. A couple of weeks ago, there was one “out of the ordinary” new development at the viewing stand.
Members from the local citizens education group, PitWatch, and the Butte Chamber of Commerce decided to try something different for the festival season this year.
The tourists start coming into Butte in high gear in July. The busiest weekend of the summer is the Montana Folk Festival when tens of thousands of people flock to The Mining City to enjoy worldly arts, music and culture beneath our tall, iron headframes and historic buildings.
Mining and environmental cleanup are also vital and well-known parts of Butte’s present culture. Both are on full display at the Berkeley Pit viewing stand. Therefore, it shouldn’t come as a big surprise that many of these visitors end up going there to see the eye-catching blue-green, yet infamously contaminated waters of the Berkeley Pit.
There are plenty of hair-raising facts that people have heard about the Pit, leading to its ominous reputation – it’s nearly a thousand feet deep, holding close to 50 billion gallons of water contaminated from acid mine drainage. Birds have died from landing on and drinking the water, which will have to be treated “in perpetuity.”
But what about some of the newer facts? Much is going on recently at the Pit, so much so that it’s hard to keep up. For instance, did you know that since the last tragic bird die-off in 2016, scientists and managers at the Pit have successfully scared off and saved 99.8% of all birds that have landed?
Or how about this past spring? For the first time since the Pit began filling in 1982, water was pumped and treated out of the Pit at the same rate it’s coming into it, thanks to a new water management system constructed on site at the mine. Plus, later this year, once up and running properly, there is a newly constructed water polishing treatment plant that will be able to discharge clean water to Silver Bow Creek for the first time ever. These actions put the cleanup at the Pit four years ahead of schedule.
These are just some of the major changes being brought to bear on Butte’s Berkeley. And the people working on it and those charged with informing the public feel that more folks “out there” need to know.
In an effort to bring visitors up to speed, members from PitWatch and other subject matter “experts” working on the Superfund cleanup at the Pit were at the viewing stand on the Thursday, Friday and Saturday of this year’s folk festival to “show and tell” precisely about the past, present and future of the Pit and to accurately answer people’s questions.
At one point on Friday, scientists working on the Pit even flew a water-sampling drone in front of the viewing stand for visitors to see in action. This aerial drone technology is capable of taking water samples 200 feet below the surface of the Pit, while another drone boat constructed by researchers at Montana Tech can draw samples from over 600 feet deep.
These are a few more of the exciting new developments ongoing at what is arguably one of the nation’s most iconic Superfund sites. The media does its best to report on these developments, but with so many other stories and important topics to cover, it’s impossible to cover it all in depth. Even if the media could, it’s just as impossible to expect readers of the general public to find the time to keep up. It seems we’re always getting busier and busier, with no time to spare.
In the case of the Pit, catching a captive audience became the best approach. Over the nine hours that the viewing stand was specially staffed during the festival, over 600 visitors, young and old, from near and far asked dozens of Pit-related questions.
Everyone who came eventually left knowing lots more about Butte and the Pit than they ever did before. And the folks helping PitWatch learned some new things too – hanging out at the Pit and talking with people is a great way to educate them!
Feedback from many of the visitors, not to mention the experiences of the folks who helped out was so positive, there’s no doubt we’ll be doing it again – and maybe even more often!
You can also view this post at: rampart-solutions.com